NATO was established in 1949 with the full force of U.S. domination—it was presented arrogantly as a defense against the Socialist Soviet Union. From that period until the 1990s, NATO forces main use was to prevent social revolutions in Western and southern Europe, hardly a defense against Soviet Socialism. It actually repressed social movements specifically in Greece – imposing a military dictatorship from 1967-74, threatened intervention in Portugal in 1974-75 and prevented social changes in Italy. Serbia became the icing on the cake to demonstrate what brut illegal force could accomplish, regardless of cost, especially in lives and treasure.

After the Warsaw Pact vanished in 1991, NATO exposed its predatory role, going on the offensive. In the 90s the NATO powers — with German and U.S. imperialism in the lead — and taking every step to weaken and destroy Yugoslavia so NATO could built weapons facilities near the Russian border.

From the start, Berlin aided reactionary separatist forces in each republic of the multinational socialist federation of Yugoslavia. But NATO’s handy work was aided by political lunatics like Senator Robert Dole. Few Americans remember or wish to bury what Dole did in setting the stage for the disintegration of Yugoslavia in his demonic vindictive piece of legislation. Just 23 lines long, and buried in the Foreign Appropriations Bill #101-513, this legislation cut all loan guarantees and aid to Yugoslavia when that nation was $31 Billion in debt. This was in direct violation of the Helsinki Act which forbids “Any act of economic or other coercion.” Senator Dole’s bill, however, shockingly allowed continued U.S. financial aid to be directed to 6 Yugoslav republics, provided they held “democratic” elections within 6 months. This was an outrageous violation of the sovereignty of Yugoslavia, ignored by the United Nations and the media in order to pit citizen against citizen, religion against religion and ethnic group against ethnic group, a recipe for disaster, known as Balkanization!

To regain hegemony over Berlin and the other NATO powers, Washington pushed the conflict toward open war, where the Pentagon’s preeminent place in destructive power would be dominate. With the help of 15 retired American generals from MPRI in Alexandria, Virginia they went to Croatia where they became paid mercenaries and controlled secret weekly flights into Croatia supplying guns and bullets violating international agreements as President Clinton claimed numerous times on television that the U.S. would remain “neutral” What a lie as the UN and NATO betrayed the Serbs at every turn.

U.S. President Bill Clinton encouraged the drive toward war to take his sexual activities with a young intern off of the front pages of the Washington Post. Together with Germany and France the U.S. under the guise of NATO used air bases in Italy and began bombing and firing missiles at mostly civilian targets in Serbia on March 24, 1999. The bombing lasted for 78 days and killed 3,000 people. Destroyed 56 bridges, including the 180-year-old bridge in Novi Sad, schools, nursing homes and hospitals were hit, in spite of the Red Cross painted on their roof, along with the bombing of the Chinese Embassy in Belgrade and Yugoslav television killing 16 victims. So much for our belief and support of Freedom of Speech.

On April 6, 1999 over 400 residential homes of Serbs in Aleksinac, killing 10 people and wounding nearly 50— there were NO SERBIAN forces within 12 miles of this bombing. With Bozo General Clark unable to find his ass or the Chinese embassy on a map, obviously he was unable to see 400 houses in Aleksinac? Major cemeteries were also bombed and it was obvious they wanted to destroy ancient Serbian graves that were now in the middle of Muslim dominated areas to erase the real history of the region.

Heroism in the defense of Yugoslavia

Many of the residents of Serbia and Montenegro — whether Serbs, Roma, Jews or other Yugoslav peoples — showed their heroism during the 78 days of open war. They walked in open spaces and defiantly defended bridges wearing T-shirts with targets on them. Those in the military were ready to fight and camouflaged their equipment so well that the bombing destroyed few tanks. Parents sent their children to grandparents in the villages, while carrying on their work in the major cities.

Yugoslavs should know that these actions were an inspiration to anti-imperialists in the United States, who were encouraged by the people’s heroic actions in defense of their land and their social rights.

Since NATO’s intervention against Yugoslavia, the U.S. has turned the alliance into an imperialist police force. No longer confined to Europe, NATO has become a worldwide intervention force at the service of the transnational monopolies that exploit global labor and resources. We should not be surprised that the U.S. has used NATO in its occupations of Iraq and especially Afghanistan, made war against Libya and Syria, and has threatened intervention in Belarus and Ukraine, even threatening Russia this year with war exercises marching toward Russian borders. 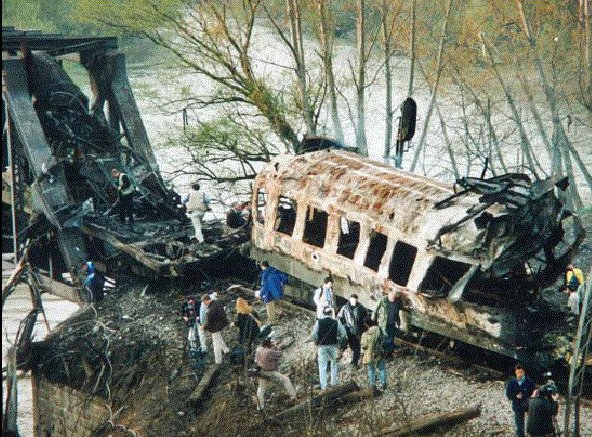 The U.S. and NATO powers succeeded, with guns and money, in breaking up the Socialist Federation of Yugoslavia. They succeeded in overthrowing the last independent government in Eastern Europe, the one in Belgrade. To add to the crimes of the imperialist powers in the Balkans, they blamed the victims of this aggressive war.

The NATO powers used the UN to set up the International Criminal Tribunal on Yugoslavia, but only crimes committed after 1990 as they totally ignored genocide and outrageous crimes that proceeded this Kangaroo Court used as a political instrument to punish anyone in the Balkans who resisted the imperialist takeover of their country. It brought charges against President Milošević right in the midst of the U.S./NATO bombing of Yugoslavia in May of 1999, to bring additional pressure on the Yugoslav leadership. It became easy for NATO and the U.S. to ignore the deaths of 2 million in the Sudan, 800,000 in Rwanda, 500,000 in Angola and 200,000 in East Timor at a time when less than 10,000 were killed in the Balkans.

The imperialists have the advantage of owning the most powerful propaganda machine in world history. But the ICTY failed miserably when it tried to prove to the world that Slobodan Milošević was guilty of any of the crimes committed against the people of the Balkans in the 1990s.
This propaganda offensive obscured the interference, subversion and “divide and conquer” tactics practiced by German and U.S. imperialism, most of all, in connivance with neo-fascist groupings in the republics of Croatia and Bosnia and in Serbia’s Kosovo province. Appalling is the fact that during the 15 years of so called “autonomy” (1974-89) the Albanian Muslims occupied all of the leading positions on The Committee of Education, Science and Culture, The Teaching Council of Kosovo, the Institute for Education, the Federal Institute of Culture, the Kosovo Provincial Archives, the Institute of History, at the Academy of Science and art, at Pristina University and in the Society of Authors. In all of these institutions the positions were occupied exclusively by Muslim Albanians. In the past several decades not one single Serbo-Croatian film has been produced in Kosovo since 1977. In Kosovo nearly every teacher, lawyer, judge, policeman, doctor, government official and politician was an Albanian. Such a cadre policy had a deeper level of aspiration: The elimination of cultural, scientific and educational potential of the Serbian minority. We treated the black minority in American in this same shabby manner and we also know too well the consequences of that political history.

From the day he was kidnapped from a Belgrade prison to Scheveningen in The Hague and placed under NATO imprisonment, Milošević carried out, under horribly unequal conditions, a heroic legal and political battle against the people who ordered him there. Like his fellow Balkans political prisoner of the 1930s, Bulgarian Communist Georgi Dmitrov, who successfully defended himself against bogus Nazi charges that he burned the Reichstag, Milošević waged his own legal defense in the bogus NATO court.

George Soros and his “Foundation” promoted Professor Cherif Bassiouni as a candidate for the war crimes jury. He was not just an “Egyptian-American,” as described by the New York Times, but was in fact, Islamic. Bassiouni students were charged with collecting evidence to prosecute, NOT TO ACQUIT. This same commission suggested that there would be NO RIGHT OF AN APPEAL, an insult to what Americans demand in our judicial system. Not one single Serbian or Orthodox Christian was considered for participation in gathering this evidence, if such trials were ever considered just. Soros did not find it necessary to consider funding a similar group to gather evidence to prosecute those accused of committing war crimes against the Serbian population. Dr. Alex Dragnich, recipient of the Thomas Jefferson Award for Outstanding Scholarship at Vanderbilt University and I prepared an entire box of evidence against a dozen Muslim terrorists that we sent to DePaul University by FedEx to Bassiouni’s attention. It was discovered two years later in a room just off of the Tribunal trial chamber unopened. WAS THIS TRIBUNAL THE BEST JUSTICE MONEY COULD BUY?

Milosevic worked with the aid of a handful of supporters and little money before hostile judges make up the rules as they went along. He still demolished the prosecution by exposing “witnesses” as “stool pigeons and war criminals trading lies for their immunity” and he was murdered because of it.

We learned that Milošević used a book the International Action Center published, Hidden Agenda, as a keystone of his defense. Ramsey Clark, the leader of the IAC, made a key contribution to this book. The NATO court spent tens of millions of dollars, prepared for a year, put on 295 prosecution witnesses, some of who appeared in this Kangaroo Court with their heads covered like KKK thugs who hid their identity over two years and proved nothing. On the contrary, Milošević turned the tables on the 500,000 pages of so-called evidence against him, showing Bill Clinton, Tony Blair, Gerhard Schroeder, Gen. Wesley Clark and the rest of the NATO heads of state and government were the real “Butchers of the Balkans” and the ones who deserved to be on trial for war crimes.